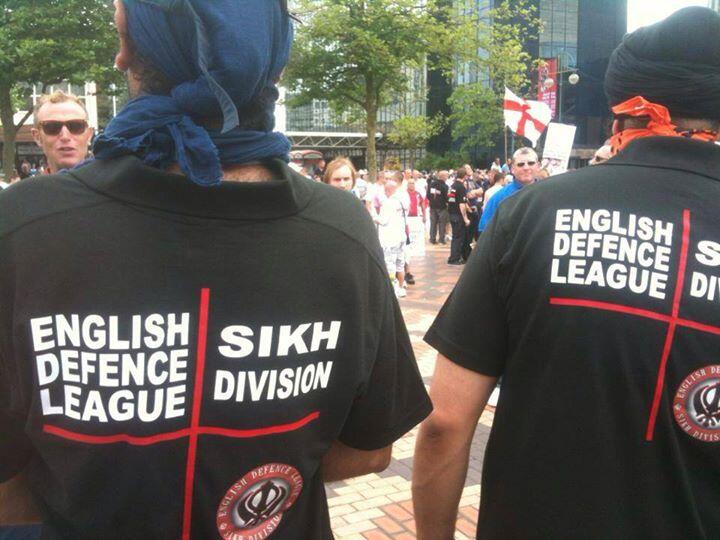 The Sikh faith does not align itself with groups or organisations which discriminate against any other religion. Sikhs believe in praying for the happiness and well-being of the whole of mankind, and they do not discriminate between people of different faiths. In fact, the circle within the Khanda insignia represents the oneness of God and of humanity. Sikhs have also died defending the religious rights of others for about 340 years, including Guru Tegh Bahadur Ji, one of its founding Gurus.

CSN respects the rights of individuals to have political views of any nature as a basic element of democracy. What CSN objects to is the use of the Sikh faith or any of its insignia to justify the hatred and discrimination of others. Groups such as Sikhs Against the EDL and the Turban Campaign have worked hard in challenging such perceptions in the past and should be commended for their hard work.

CSN understands that there may be some grievances behind the decision of a very small minority of individuals to set up a Sikh Division within the EDL. Discourse and dialogue is the only way to deal with such grievances, and CSN is committed to inter-faith relations and dialogue with people of all faiths, including Muslims.

To find out more about the City Sikhs Network, please visit www.citysikhs.org.uk

This website uses cookies to improve your experience while you navigate through the website. Out of these, the cookies that are categorized as necessary are stored on your browser as they are essential for the working of basic functionalities of the website. We also use third-party cookies that help us analyze and understand how you use this website. These cookies will be stored in your browser only with your consent. You also have the option to opt-out of these cookies. But opting out of some of these cookies may affect your browsing experience.
Necessary Always Enabled
Necessary cookies are absolutely essential for the website to function properly. This category only includes cookies that ensures basic functionalities and security features of the website. These cookies do not store any personal information.
Non-necessary
Any cookies that may not be particularly necessary for the website to function and is used specifically to collect user personal data via analytics, ads, other embedded contents are termed as non-necessary cookies. It is mandatory to procure user consent prior to running these cookies on your website.
SAVE & ACCEPT